After years of fitting the same basic-but-functional cabin, New Holland has graced its popular long-wheelbase T7 tractors with a roomier and more sophisticated workspace.

It’s also added a tuned-up T7.300 model that develops a max power of 280hp, boosting to 300hp for pto and haulage. Proportions are the same as the rest of the range, but the power hike has brought in stronger axles and taller tyres to improve traction. New Holland claims this tractor is the most powerful in its class.

The so-called Horizon Ultra cab debuted on larger HD models last year and has now filtered down to the firm’s core six-cylinder models.

Structural upgrades include 7.5% more internal space, a wider door opening and a curvier front windscreen to let in more light.

Noise levels have also been curbed to a serene 66dBa, it’s got a new cab suspension system, and there’s an improved climate control system with more powerful fans.

But the most notable changes have been to the control setup. Gone is the old cab display, replaced by a new “Intelliview” 12 monitor that has better graphics, a series of shortcuts for accessing setup screens and the ability to carry out more functions.

There’s also the option of a tablet-like screen mounted in the centre of the steering wheel. This replaces the conventional dashboard and displays information such as forward speed, engine revs, gearbox settings and pto rpm.

Initially, the cab is being offered on long-wheelbase T7s with Auto Command CVT transmissions that run from 200 to 280hp. Powershift models and short-wheelbase 165 to 200hp tractors are likely to follow soon after.

Sister brand Case IH has received the same upgrade, with the cab featuring on its larger Puma models. The only difference is that it’s called AFS Connect and there are some subtle tweaks to the control layout. 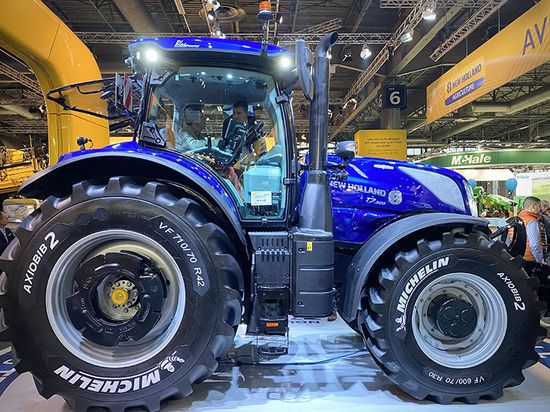