Komatsu Forest has a brand-new factory in the north Swedish town of Umeå. Instead of updating the old factory, with the limitation that could bring, it was decided to build a new one from scratch, adapted to the manufacturer’s demands. The colleague Torbjörn Johnsen at the Swedish sister-site Skogsforum.se was invited by Komatsu Forest to an exclusive factory tour. These are his impressions.

Large open areas, high ceilings, and holistic thinking concerning the environment for both people and climate. The roof is covered with solar panels and the office is mainly built of wood from the spruce forests close by.

In the article, you will find photos from both the factory and the office. Photos that were given to us from Komatsu Forest as cameras are not allowed on the premises. Thank you!

The factory has been tuned for a year

For one year all Komatsu Forest machines are built in the new factory. After fine-tuning both warehouse and assembly lines, production has now gained speed. But, as for all machine producers Komatsu Forest has problems getting components. The strategy has been to produce machines at full speed anyway and store some machines until the last details have arrived and been mounted. This is to make the tuning as efficient as possible.

The vast production of unfinished machines has caused the outside areas around the factory to shine nicely red with new harvesters and forwarders waiting for the last components to get ready for delivery. Torbjörn counted some 60 machines when he was there. But during the time of his visit also two harvesters were loaded for delivery.

The mother company’s manufacturing skills have been an asset. After some starting-up problems, the factory’s production capacity now can be verified. The exact number of manufactured machines is a secret, but 25 – 30 machines per shift and week were mentioned. Then you just have to do the maths …

Based on sales statistics from different markets you can estimate that Komatsu Forest has had a production of approx. 1.000 machines per year in the old factory. Based on the above facts you can calculate that the production pace can be doubled when the supply chains have been tuned up.

The demand for forest machines is still high and according to Komatsu Forest, the delivery times are up to one and a half years for some models.

Gigantic stock only for the production

The warehouse is a story of its own. It takes a significant area and volume at one end of the factory with shelves from floor to ceiling. Totally 8.000 articles are here, and that’s only for production. The warehouse for the aftermarket is close to Arlanda, Sweden’s main airport by Stockholm.

The main challenge during the start of the new factory seems to have been the warehouse function, especially the software that should keep track of everything. One can imagine the chaos if the computer doesn’t know what is there and where it is.

In the factory, there is one production line. The difference compared to the old factory is that the old one had specific lines for different products. The process starts with the frames being mounted on “wagons”, so-called AGVs (Automatic Guided Vehicles), that transport the machines along the line until the wheels are mounted. After they are mounted, the AGV returns to its starting position.

The machine moves forward in the line as the components are added. Along the line, there are pre-assembly stations where different parts of the machines, like engines, cabins, loaders, etc., are prepared to be mounted on the machine. Also along the line, but further out, larger parts are stored. E.g., hoods, gates, cabins, etc.

At the end of the line, there is a station for filling up fluids and starting the machines. It’s also where the wheels are mounted. After this, the machines roll into a test room where pressures are set, and testing and fine-tuning are done.

The new factory is mainly an assembly facility. Welding and processing of frames, loaders, and other components are essentially made by sub-suppliers. What the future looks like in this is nothing Komatsu talks about. But there is space for development, indoors and outdoors, that would make it possible to produce more machine parts within the factory walls.

The office in the new Komatsu factory is worth a separate chapter. It has a 4.500 square meter (48.400 square feet) office area on six floors. It has wooden beams, made of glulam and cross-laminated timber of local spruce. Much of the office has surfaces of exposed wood. You could feel the smell of timber! Furniture and furnishing are a mix of modern high-tech design and rustic wood.

According to the wood supplier, the frame of the office contains 1.400 cubic meters (49.440 cubic feet) of wood which stores approx. 950 tons of carbon dioxide.

On the factory roof, 19.000 square meters (204.500 square feet) of solar panels are mounted. It’s calculated to produce 2,6 million kWh of electricity per year which, according to Komatsu, should cover the company’s demand.

As mentioned above, cameras are not allowed in the new Komatsu factory. However, Komatsu Forest has been kind enough to provide us with all the photos in this article.

If you want to know more about Komatsu Forest and its products, a visit to the homepage is recommendable. 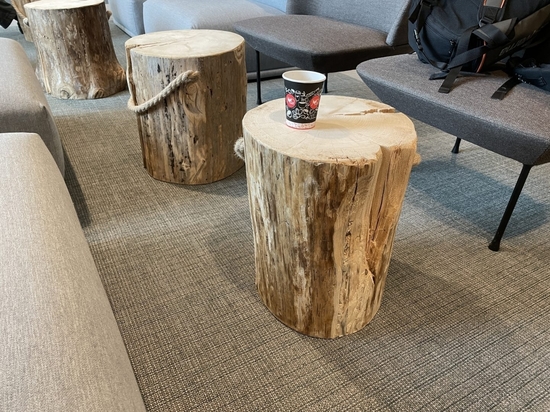 Rustic tables, direct from the forest. 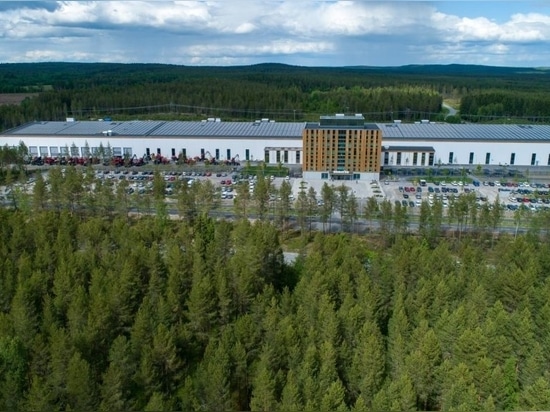 The new Komatsu factory from above. 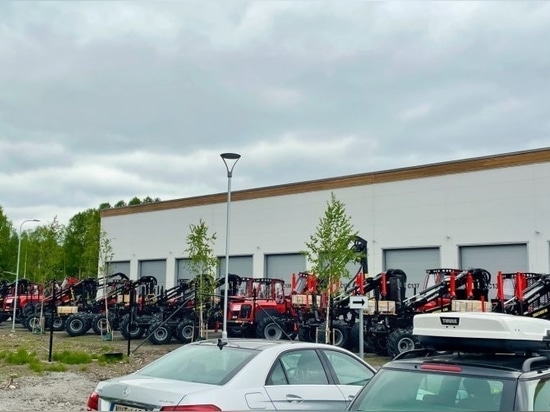 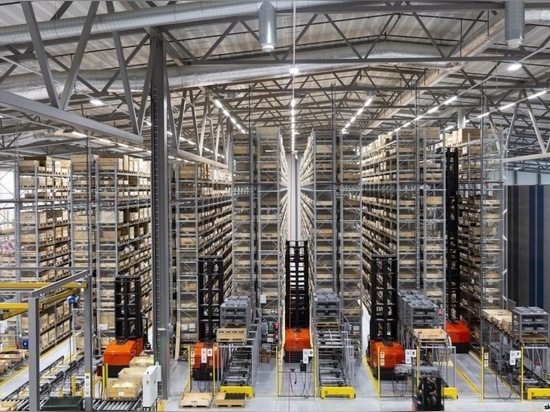 The warehouse holds some 8.000 articles, exclusively for the production. 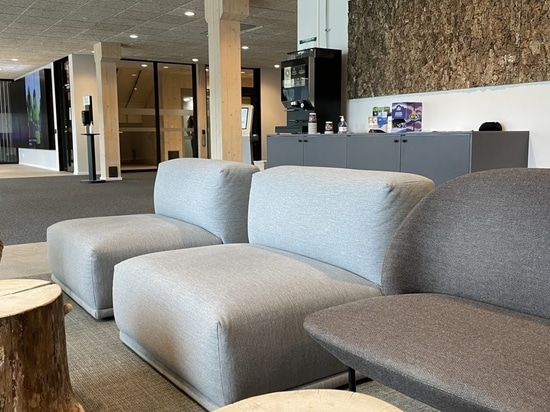 Interior at the office.