CLAAS is renewing its medium-sized TORION series with the introduction of the new 1285, 1611 and 1611 P models. In addition to more engine and hydrostatic drive power, the wheel loaders are characterized by a new Z-kinematic with stronger lift arms and unique comfort features.

Since 2018, CLAAS has been offering wheel loaders for the agricultural sector in numerous European markets through a cooperation with Liebherr. Three series with a total of 11 models cover operating weights from 4.6 to 20 t and engine outputs from 46 to 245 hp. To date, more than 1,000 units have been delivered to satisfied customers.

After the two flagships of the TORION construction program, the TORION 1913 and 2014, received higher lifting and holding capacity in addition to greater loading height in 2021, these performance-enhancing features are now finding their way into the medium-sized TORION series.

In addition to its first-class reactivity, the newly developed Z-kinematic is characterized by reinforced and lengthened lifting arms with larger hydraulic rams and more powerful hydraulic pumps. This increases the lifting power and transfer height, with 100% parallel guidance being guaranteed at the touch of a button. Thanks to the new Z-kinematics, there is significantly more lifting power, especially in the lower lifting range, as well as more holding power in the upper lifting range, so that larger bucket volumes and heavier bale grabs can be used. Lift volumes up to 4.5 m3 with a high bulk density and up to 7.0 m3 with a low bulk density are available with the light goods bucket, and up to 4.5 m3 with the high-tip bucket.

In order to be able to absorb the higher lifting and breakout forces, the steel construction of the front end has been reinforced. The new mast includes extra reinforcing, for example on the lift arms and the cross tube. At the same time, the axles on the TORION 1611 and 1611 P have also been reinforced. The operating weight increases accordingly to 15,810 and 15,200 kg respectively. The TORION 1285 has an operating weight of 13,570 kg.

In addition to the standard version with Z-kinematics, all three models can be supplied with HIGH LIFT masts. Depending on the model, the bucket pivot point increases by 52 to 58 cm to 3.85 to 4.52 m.

However, the new medium-sized TORION series is not only strong, but also smart. In addition to the bucket return, the upper and lower end positions of the mast can be saved for two implements using the automatic lifting height and lowering depth control. The tipping assistant provides further relief. To make billing easier for biogas plants and contractors, all models can be equipped with a weighing device with Load Assistance System, i.e. addition memory and back-weighing function.

The shaking function, which allows the bucket to be unloaded in a controlled manner, offers considerable added value. The automatic return of the HL high-tip bucket and the perfectly coordinated end position damping relieve the driver and enable fast loading manoeuvres.

In order to enable faster cycle times with increased payload and higher operating weight, all three TORION models in the middle series have greater engine power and larger drive pumps and hydrostats for the VARIPOWER drive. The TORION 1285 with its 157 hp replaces the previous TORION 1177 and 1410 models with 137 and 165 hp respectively, while the TORION 1611 has an increase in output to 207 hp (+23 hp compared to the previous TORION 1511) and the TORION 1611 P has an increase in output of 45 hp to 252 hp. Thanks to the speed reduction, a higher torque is already available at low speeds. The TORION 1611 P in particular benefits from this, as the additional output is noticeable and pays off, especially when working in silos and for fast straw handling. 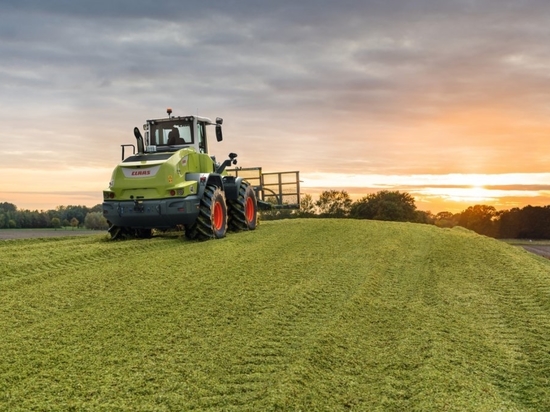