Robots scurrying quietly about the countryside, undertaking the task of us mere mortals has long been talked about as an idea but it has seldom been realised, despite the endless promises from various machinery companies. However, this particular version of the future has taken a step closer to becoming reality with the arrival of Kuhn’s latest diet feeder, the fully autonomous Aura.

The company claims that the machine has the capability to feed up to 280 cows using GPS (global positioning system) and RTK (real-time kinematic positioning) to move around a farm, collecting, mixing and feeding out a total mixed ration (TMR).

This ability extends to helping itself to silage from a pit face, using a milling head, so it is unlikely, at present, to suit farms that rely on bales.

By milling the silage as it is loaded there is not the need to grind large chunks of forage up in the tub, keeping the power requirement low, enabling the feeder to operate on a 56hp diesel only.

It has inbuilt loading and weighing modules which calculate the exact mix of forage material, including grass and maize, along with any supplements and concentrates required.

The Aura is compact in size, standing 2.6m high, 1.9m wide and just under 7m in length. This enables it to move around most farms, covering all areas such as feed passages and clamps.

It feeds out at a speed of 2km/h on both the left and right, using a conveyor, and can travel at up to 7km/h. It is also capable of climbing a 20% gradient.

Its guidance system relies on both GPS and RTK when in the open and LIDAR (light detection and ranging) when inside buildings, in conjunction with an onboard odometer.

Aura as a feeding system

Purchasing an Aura will require a full installation as the farm will need to be mapped and wi-fi devices installed to enable connectivity wherever its location. For safety, it also has inbuilt sensors to stop or help avoid objects.

The TMR can be recalculated as often as is needed and uploaded to the Aura remotely. Having been informed of the ration required, where it is required, and when it is to be fed, the machine can travel to sources of forage, concentrates and minerals to load.

As a further part of the installation process, the farm will have augers connected to silos containing concentrates and minerals that have a receiver to communicate with the Aura’s onboard transmitter.

The Aura also features rotating bushes that push up forage and double up to clean the clamp of any fallen material. The brushes operate on both sides of the machine to offer the flexibility to feed in any housing.

The case for automation is usually made by tractor companies with big ideas about autonomous tractors. Kuhn, amongst others, is showing the route is far more likely to be incremental and role specific.

The first country to be offered Aura is France, with other countries in Europe following on afterwards. We are unlikely to see it in Ireland or the UK until 2024/25. 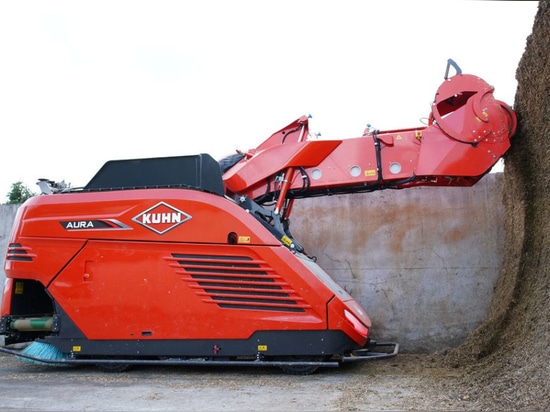 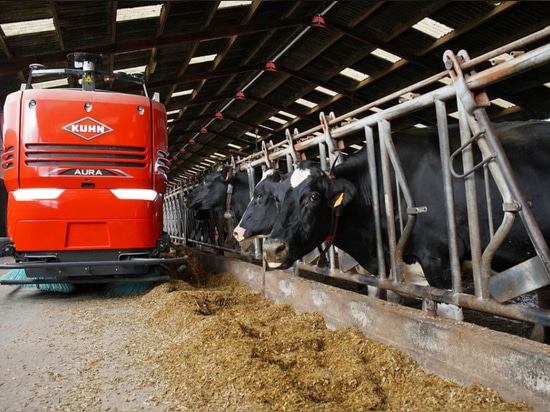 Nothing is rushed with the robot, it feeds out at a steady 2kph