Kuhn is planning to add a third series of trailed mixers to the two ranges it already offers, as well as its fully automated machine.

The new machines fill the gap between its Profile S and L range of trailed mixer wagons with this new Profile M series.

Fitting neatly between the narrow- and wide-bodied machines, and aimed at medium-sized farms, the M series will be produced from 2023 onwards in five mixing capacities from 16m³ to 25m³.

The 20m³ is the first to be launched which an overall height of less than 3m, making it suitable for sheds that do not enjoy the luxury of a high roof.

The largest machine in the range is the 25m³ model which, it is claimed, can feed 200 cows in a single pass, a capacity and performance which should fit the average UK dairy herd which is estimated to be 212.

There are two feed-out options available; a cross conveyor on the CM model can be positioned at the front of the machine, and a chute or tilting slide conveyor is offered on the DM models.

‘Plus’ models are specified with a straw blowing turbine capable of blowing 158kg of straw up to 18m/min, and all models can be upgraded by adding a selection of tub extensions.

All models in the range feature Kuhn’s five-load cell weighing system which is said to work well with both small and full-load mixtures.

The weigh cells ae also coupled to Kuhn’s unique C-Drive system which, with a 1.10m distribution door, produces a fast and well balanced distribution of forage.

The twin augers can be specified with Kuhn’s long-life K-NOX coating. This is claimed to increase the life of the auger by up to six times by acting as a corrosion-resistant layer to protect against the abrasion of harder particles within the mix.

Should customers need to place the mix into troughs or raised feeders, Flexilift can be specified.

This tilting cross conveyor will distribute forage evenly and does not protrude beyond the body of the mixer wagon. 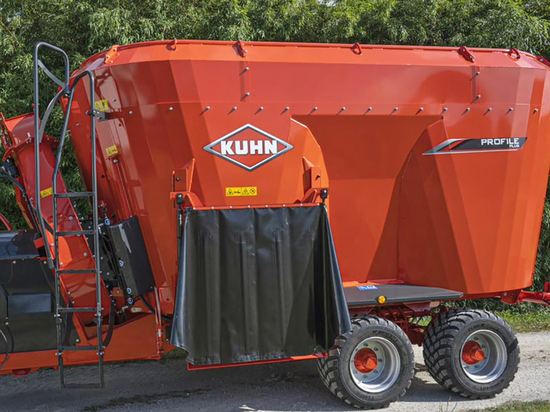