Trials helps customers get the best combos on their farms

Whether or not you’re ready to make the leap to drone technology, AgriGold customers are ready to reap its benefits. The seed company is using this cutting-edge technology to vet fungicides and how they perform with its hybrids.

“We’re trying to understand our hybrids as well as we can by using drones to spray fungicides and micronutrients to see which respond the best,” says AgriGold Agronomist Ron Roling. “We share that information with the farmers and dealers we work with. We’re passionate about helping them decide which hybrid/fungicide combos are best at maximizing productivity in their area.”

As part of these trials, AgriGold works with individual farmers using different hybrids and various fungicide and micronutrient mixes. Roling says, “Drone applications provide a quick, easy way to test multiple fungicides and micronutrients across fields in a replicated environment.

“We’re running unbiased trials on fungicides that are on the marketplace today,” he adds. “Since we’re not in the fungicide business, we’re focused on collecting data that can support our farmer customers’ decisions on which products are of value and also which hybrids best respond to various fungicides.”

Drones will become a staple at farms with more than 500 acres over the next five years, in part due to their versatility, predicts Tom Hermann, an AgriGold seed dealer, farmer and partner at Altitude Ag LLC. “Drones have many applications, from spraying fungicides to spreading cover crops to clearing brush,” he says.

Drones are a great option in areas where fungicide application with airplanes, helicopters or self-propelled hi-boy rigs would be challenging, such as near residential areas, according to Roling. He adds drones are also an option for spot-treating a section of a field.

“Drones can provide more flexibility in terms of when you can apply fungicide,” Roling says. “They enable timely applications when fields are saturated, and we can’t get a sprayer in or across the field.”

Hermann says drones make a lot of sense for farmers in southeast Missouri because of the smaller field sizes than neighboring Iowa, for example. He says ground rigs are not a viable option for corn and those fields are too small for planes. Farmers’ only option had been to pool acres with others until they had a big enough footprint to hire a helicopter.

Overcoming the challenges of drone application

As with any new technology, drone fungicide application is not without its challenges and limitations, many of which have to do with time and scale.

“It takes longer to spray a field with a drone,” Roling says, referencing time spent refilling drones and swapping batteries. “Ground rigs can spray 10, 12 or 15 gallons an acre, while most drones are limited to 2 gallons of solution an acre,” he adds. In addition to covering a wider swath, airplanes also move a “heck of a lot faster,” he points out.

Some of the largest drones available today can cover about four acres per tank, but Hermann says refilling the drones and switching batteries generally takes less than a minute. You just have to get in the habit of doing so, he says. Furthermore, according to Hermann, “Drones can cover around 35 acres an hour, and the quality of that coverage is better, in my opinion.”

There’s also a cost advantage with drones, says Hermann. “Helicopters can cover far more acres than a drone in a day. But they are also more expensive,” he says. The cost to operate the drone itself is less than $2 an acre, and that includes paying someone to run it. That compares to aerial application costs that can vary from $8 to $16 an acre, depending on the region, he continues.

Looking to the future

Roling expects drones to “become a bigger factor in a lot of our spraying as technology improves.” One of the biggest hurdles is time, he says. “If we figure out a way to get it done quicker with drones – whether that’s via bigger drones or faster drones or longer battery lives – usage will increase.”

Hermann expects farmers will rely on larger drones and swarms of drones in the future. He anticipates larger drones that can hold 60 gallons of liquid to hit the market in a decade.

Another hurdle to wider adoption is cost. “Technology continues to get cheaper. As that happens, farmers will be more interested,” Roling predicts.

“The biggest challenge is trusting the machine. The drone is going to do everything you tell it to do,” Hermann says. Therefore, he says mapping fields correctly is critical; that includes understanding field boundaries and what you need to set for your offsets.

“Technology scares a lot of people, and farmers hesitate to ask questions because they don’t want to sound ignorant,” Hermann says. “When we do demos and show people how easy they are to operate, farmers quickly shift their mindset from ‘I can’t do this’ to asking, ‘Why haven’t I done this sooner?’” 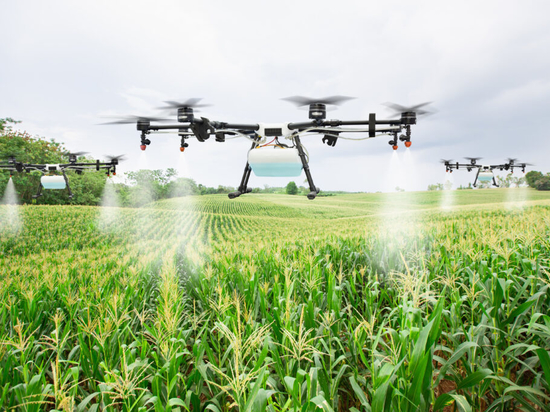