In the world of robotic startups, acquisition is often as good an outcome as any. And when it comes to robotic tractor startups, you could do worse than being acquired by John Deere. The agricultural technology giant announced today that it’s set to acquire Bear Flag Robotics for $250 million.

The Bay Area-based firm, which specializes in autonomous farming heavy machinery, was founded in 2017. They first crossed our radar the following year, as a member of YC’s Winter 2018 cohort.

“We got a tour of an orchard and just how pronounced the labor problem is,” co-founder Aubrey Donnellan told TechCrunch at the time. “They’re struggling to fill seats on tractors. We talked to other growers in California. We kept hearing the same thing over and over: Labor is one of the most significant pain points. It’s really hard to find quality labor. The workforce is aging out. They’re leaving the country and going into other industries.”

In the intervening years, John Deere tapped Bear Flag for its own Startup Collaborator initiative. And the robotics firm has also begun to deploy its technology to an undisclosed (“limited,” per their wording) number of sites in the U.S.

“One of the biggest challenges farmers face today is the availability of skilled labor to execute time-sensitive operations that impact farming outcomes. Autonomy offers a safe and productive alternative to address that challenge head on,” co-founder and CEO Igino Cafiero, says in a release. “Bear Flag’s mission to increase global food production and reduce the cost of growing food through machine automation is aligned with Deere’s and we’re excited to join the Deere team to bring autonomy to more farms.”

Agricultural is one of several robotics categories that have seen a spike in interest in the past year, due to labor shortages that predate but were exacerbated by the global pandemic. Of course, that interest doesn’t make anyone immune from the difficulties of launching a robotics startup.

Last month, apple-picking robotics firm Abundant confirmed it was closing up shop, noting, “After a series of promising commercial trials with prototype apple harvesters, the company was unable to raise enough investment funding to continue development and launch a production system,” the company noted at the time.

An acquisition seems like a reasonable outcome for a company like Bear Flag. The startup gains a lot of resources from its massive new owner, and its new owner adds some new tech to its portfolio. Indeed, John Deere has been pretty aggressively looking to expand into more cutting-edge technologies like robotics and drones in recent years.

Bear Flag will retain operations in the Bay Area. 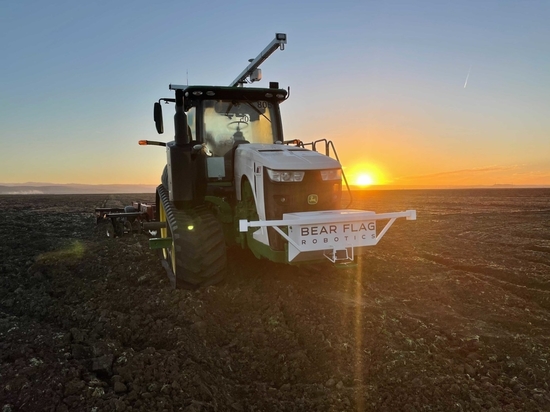