The Irrigation Association recently announced Nelson’s All-Flo PPR (precision plug-resistant) pressure regulator as the winner of the 2020 New Product Contest in the agriculture irrigation category. While the contest is usually held during the annual Irrigation Show and Education Week, this year’s contest was held online.

The All-Flo was designed with a larger-than-normal diaphragm, which means it is more sensitive and responsive to small changes in outlet pressure. This means better accuracy and better uniformity. When a pressure regulator’s diaphragm senses too much outlet inlet pressure, it moves the plunger against a stainless steel spring. Pressure is regulated when the plunger interacts with the seat — as the plunger moves up and down, outlet pressure is adjusted.

The stainless steel springs in Nelson’s pressure regulators are manufactured by Nelson to ensure the actual pressure is as close as possible to the nominal pressure.

A key feature of the All-Flo is reduced plugging. To accomplish this, the offset single-strut seat within the pressure regulator is located out of the direct flow path, minimizing the area in contact with the flow path, as well as any debris that could come through the sprinkler assembly. The seat also has a steep slope, allowing debris to easily slide off it.

Because the seat has been moved out of the way, the plunger has room to be angled at 5 degrees, which also helps minimize the amount of debris that can be caught in the regulator, reducing plugging.

“The angle of the plunger really opens up the flow path. It’s a straighter flow path, so there’s less turbulence, which cuts down on friction loss through the pressure regulator so we get more flow,” explains Gene Ross, vice president of global mechanized irrigation at Nelson. “It’s a wider opening, so if there’s any material in the water, it’s less likely to get caught.”

In addition, the plunger is oversized — with about 52% more area compared to other plungers — resulting in an increased flow capacity.

“We can get more water through the pressure regulator with less friction loss. So it doesn’t require high inlet pressures on the big nozzles on the end of a pivot,” Ross says. “The All-Flo handles our full nozzle range from 6 to 20 [pounds per square inch].”

Having a single unit handle a wide range of flow cuts down on inventory needed in the field — and prevents the confusion that can come with using two different models of pressure regulators on the same pivot. The All-Flo also handles a range of flow capacities — from 0.5 to 20 gallons per minute, reducing the need for a high-flow pressure regulator.

“Often, with longer pivots and/or higher flow rates, you might need more than 12 to 15 gallons per minute out of one nozzle, so you would have to add more sprinklers or go to a high-flow regulator,” Ross says.

The All-Flo requires a minimum of 5 psi over the nominal pressure to maintain an accurate pressure, allowing a lower operating pressure and resulting in reduced pumping costs.

“The All-Flo uses the same basic design that goes back a long time, with a rubber diaphragm and metal spring, but with some material, dimensional and architectural changes to add accuracy and capacity and resist plugging,” Ross adds. 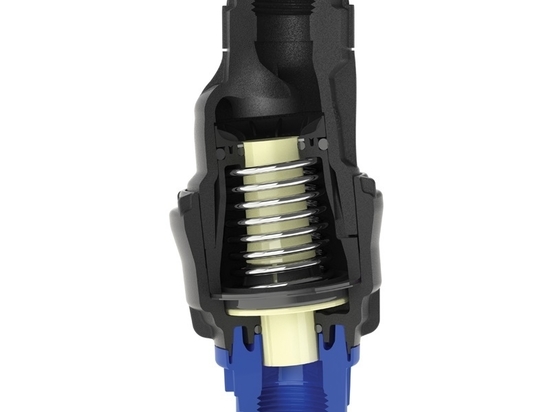 Nelson’s new All-Flo PPR (precision plug-resistant) pressure regulator was designed to reduce plugging. The offset single-strut seat is located out of the flow path, minimizing the area in contact with the flow path, as well as any debris that could come through the sprinkler assembly. Because the seat has been moved out of the way, the plunger has room to be angled at 5 degrees, which helps minimize the amount of debris that can be caught in the regulator.