DEVELOPED WITH THE FARMER, FROM THE GROUND UP.

With a career in telecommunications and manufacturing and with family ties to Idaho, Ehsan Soltan found a way to apply his background and problem-solving skills to agriculture. And it all began by paying close attention to farmers’ pain points.

“I attended grower meetings just to listen and learned that growers and farm managers would drive hundreds of miles a day to pick up soil and then determine moisture levels to plan irrigation,” Soltan recalls.

He realized he could develop a wireless, standalone moisture sensor that would allow farmers to direct their time and attention to other responsibilities. He tested multiple variations with local potato farmers who provided invaluable feedback and helped validate the design.

“The most important participant in this process is the farmer, so frequent collaboration was key in the early stages of development,” Soltan says.

After the initial testing, Soltan 3D-printed 50 units for five growers to deploy in their fields and over time, their input led to additional features like an accelerometer to detect bruising, GPS tracking, and a humidity sensor.

Thus, the Soiltech sensor has evolved into a multifunctional device with features that provide value across the whole supply chain.

A device is planted in the ground with the crop at planting – no complex setup or SIM card registration required. Actionable data is recorded and communicated through the cloud, viewable on a phone app and web platform throughout the growing season. During harvest, the device collects data to provide insights when bruising is most likely to occur. Post-harvest, it tracks trucks on the road from field to cellar and from cellar to processor.

Soiltech sensors utilize a CAT-M1 LTE technology that allows for greater reach in range, bandwidth, and data load. The signal from the device is sent through the soil and through any crop cover by existing cell towers. This eliminates the need for a farmer to install his own gateway or other devices to aid with the connection.

“The data is accessible in one place in real-time,” Soltan says. “A farmer can look at trend lines of moisture, compare field performance in terms of yield, and use all of the information to direct strategies for the following year.”

Potato fields are where Soiltech got started, but now the company serves farmers with crops of onions, sugar beets, sweet potatoes, hay, alfalfa, barley, corn, beans, watermelon, and cotton. The unit can be used in a variety of crops and over multiple seasons.

Luke Radford, Agronomist for Moss Farms in South Central Idaho, used a Soiltech prototype in 2019 and a full production unit in 2020. Moss Farms has potatoes, seed potatoes, sugar beets, and some corn acres. Radford and the team carefully monitor water use and soil nutrition levels to better control crop quality.

Soiltech piqued his interest as it was “outside of the box” compared to other devices available in the industry and because of its up-to-date, easy-to-use interface.

“I’ve experimented with several different moisture monitor systems in the past, whether through processors or ag retailers. I never found a system that was the complete package with solid data and user-friendly software,” Radford says.

At Moss Farms, Radford had planned to plant the device along with the potato seed in the spring of 2020. Of particular interest is the temperature sensor, which they planned to use to track and predict when the potatoes would begin to really take off in the ground.

Unfortunately, as the effects of COVID-19 caused delays in planting, they were unable to plant both at the same time. The team adapted their original strategy and buried devices in the fields after the potatoes began to emerge.

Radford says other devices that require setup and calibration typically cannot be implemented until halfway through the growing season due to the time and attention needed. That is a lost opportunity to collect data. He is still pleased with the amount of input captured.

“The device is helping us even now as we get ready for harvest. The internal potato temperature is really important for the risk of bruising,” Radford explains. “If the crop is harvested over 65 degrees pulp temperature, it’s at an increased risk for bruising. If it’s too cold, it runs the risk of shattering during the harvest process.”

Because the Soiltech devices can be dug up with the potatoes, Radford knows when it’s the optimal time to get out into the fields.

FARMING FOR THE FUTURE

The ultimate Soiltech goal is automation.

“We encourage growers to put multiple devices on one field,” Soltan says. “We're striving to automate pivots and the irrigation process. The only way to do that is to have enough data points on one field to trust that you're making the right decision.”

While there will be challenges, Soiltech is poised to help farmers, especially by providing data.

Radford says, “It’s extremely difficult to grow a successful crop when you don’t have the data easily available. WE can remove some unknowns and use our data to increase profits, view soil temperature and moisture, and manage the harvesting process.”

Pressure to produce crops in an environmentally sustainable way continues to grow, he says, especially from consumers.

“Data driven technology is coming to the ag industry slowly,” Radford says. “Innovation is extremely important, especially if you want to continue farming into the future. This technology helps increase profits, removes any guesswork in the farming process, and makes us good stewards of the land we farm.”

Again, a farmer-first approach has been Soltan’s driving force since day one.

“You can’t tell growers or farm managers how to manage their own land,” he says. “They’re the experts of that. We can only listen to their pain points and hope to provide a tool that helps.” 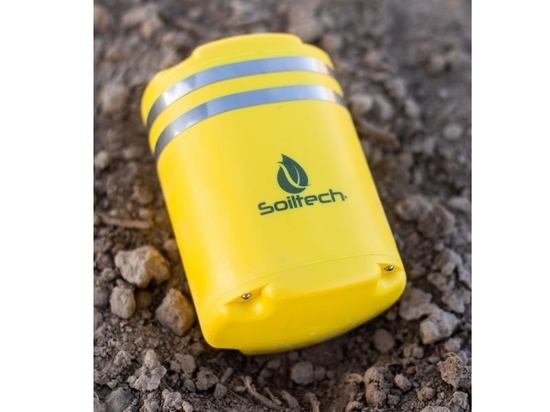