Producers can control systems such as fans and lighting using a tablet or smartphone.

It’s described as the “dairy industry’s most comprehensive ventilation, lighting and cooling control system,” and it can all be controlled using a smartphone or tablet.

VES, which designs and builds ventilation, long-day lighting and cooling systems on dairy farms, has officially launched DairyBOS, a smart dairy barn control system that allows precise control of fans and other environmental systems inside barns through a cloud-based interface.

“The key advantage of DairyBOS is the ability to establish an environment within each facility that allows for optimal animal health, well-being and productivity,” says Mark Doornink, vice president of product management for VES. “Sensors throughout the barn, connected fan feedback, as well as real-time weather information allows the system to adjust ventilation, lighting and cooling within DairyBOS to ensure an environment that reduces instances of disease and lameness, and encourages comfort, rest and optimal feeding-producing conditions for each cow.

“It allows you to be in complete control of what’s going on in your barn environment,” he adds.

The main feature of the DairyBOS system is the user interface, which a producer can access anywhere — on IOS or Android smartphone or tablet — so long as they have a wireless internet connection. It provides close to real-time data on temperature and humidity in barns, as well as weather and market reports.

But what makes the system unique is a producer’s ability to control ventilation and other environmental conditions remotely. This is made possible through VES Direct Drive fans, which are beltless and powered by the Smart Motor System developed by Turntide (formerly known as Software Motor Co.) The fans are wirelessly connected to cloud-based controls, so a producer can adjust things such as the temperatures at which the fans will stage, idling speeds and more.

The real power of the system, Doornink says, is the amount of data available at a producer’s fingertips, so they can provide the optimal conditions for improved milk production and better cow comfort. So, if the weather is calling for a heat wave, a farmer can adjust the fan speeds and temperature at which the fans will turn on and off, and they can look at past cow performance as a guide.

If it’s too humid, they can increase air circulation to dry out the barn. They also can adjust the lighting in the barns to simulate a summer day in the middle of winter.

A producer also can add other users who can see the data and manage the environmental conditions, as well as restrict others on what they can see and do.

Doornink says that future updates of DairyBOS will incorporate feed and herd management data, as well as integrate other systems such as alley scrapers, manure pumps, compressors and more. Future updates also will include 2- and 3D views inside barns.

The initial launch of DairyBOS is in the U.S. with future rollouts around the world at future dates. There are three test locations right now, including at Fetzer Farms in Elmwood, Wis., where the online launch of DairyBOS was held. Two other locations are in the Midwest. Direct-drive fans have been installed at 15 locations, and there are plans to have more than 30 by the end of the year. All of those locations will be using the DairyBOS system, according to VES.

Retrofits on existing dairy farms might be a challenge.

“In our initial research, it has not shown to be economical to put a smart motor on a ‘dumb’ fan blade," Doornink says. "The fan blade is designed for a particular RPM and desired CFM, so a new blade is also needed. That leaves just the existing fiberglass shell as the old equipment, which does not make economic sense. We are able to connect and control existing legacy fans and devices using their old motor technology.

“The application of the new, smart motor technology into other situations — like pumps, augers and scrapers — is part of our current focus, along with Turntide Technologies.”

Doornink says that any producer interested in getting the system should reach out to one of the company’s dairy experts at ves.co/dairy-expert. 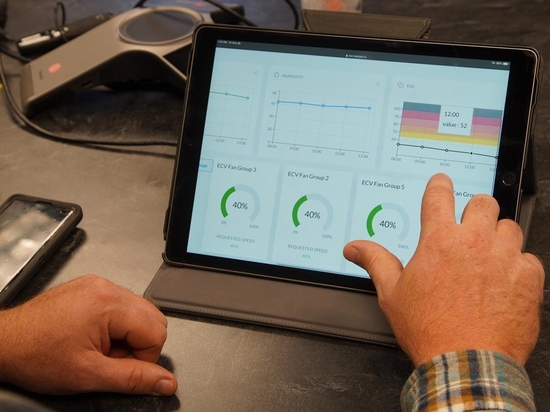 REMOTE CONTROL: The VES DairyBOS system is controlled using an online interface that can be accessed via tablet or smartphone