A Victorian dairy farmer has bought a beefed-up Silvan 2000-litre trailing pasture sprayer, the Paddockmaster, to help him convert his farm to organic production.

Simon Scott who farms at Barongarook West in south west Victoria runs a herd of 350 mainly Jersey and crossbred dairy cows and 50-60 beef cattle on his 320-hectare undulating farm in the Ottways.

He is moving away from traditional, granulated fertilisers as he switches to organic production.

His modified Silvan sprayer was customised for him from an existing pasture sprayer.

Silvan now has plans to produce more of these sprayers to meet the growing demand from those converting to organic dairy farming and requiring a dual purpose sprayer able to handle thicker organic liquid fertilisers and herbicides.

According to Silvan account manager Mark Murnanme, many dairy farmers are moving to become organic due to the higher returns on offer from suppliers like Bega and The Organic Milk Company.

Mr Murnanme said that in turn was putting pressure on local manufacturers like Silvan to produce the specialised equipment required.

"It's certainly generated a lot of interest because there's really been nothing like it built locally," he said.

At least two more units have been quoted by Silvan since Mr Mr Scott's sprayer has been delivered.

"We're really hopeful of putting a lot of these into the market. Demand is coming mainly from dairy farmers but also (beef) cattle producers in the (south west) region."

Mr Murnanme said liquid fertiliser needed good agitation to get it through a nozzle without blocking.

The new unit was similar to Silvan's standard herbicide sprayer but with modifications to handle the organic liquid fertiliser.

Mr Scott's modified sprayer comes with in-cab, electric pressure controls and a 12-metre manual fold, suspended suspension boom, with fertiliser nozzles which enables a coverage of 18m to be achieved.

To adapt to the soup-like liquid fertiliser, nozzles, filters and spray lines also had to be modified.

Two retention lines into the tank were added to keep the mixture "stirred up" and the hose lines upgraded to a bigger size.

A second dedicated line to the four field jets with 18mm holes was added as well to avoid blockages.

The most expensive modifications was the addition of a hydraulic stainless steel pump to handle the mixture.

Mr Scott has 12 months to go before he gains organic certification but already he is producing an organic milk line for Bellamy Organic which pays a 30 per cent premium to normal milk solids.

The recommended retail price for the modified sprayer will be $32,980 inclusive. 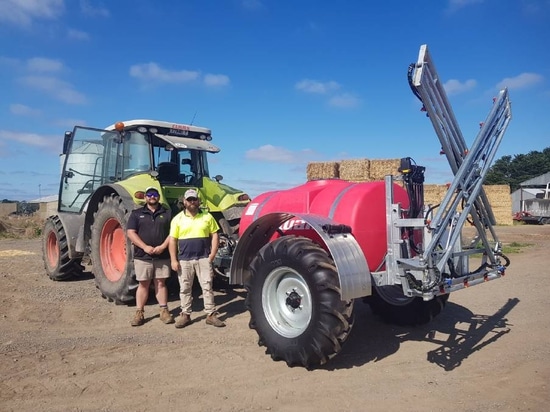