What was unveiled as a futuristic concept tractor in 2019 has been transformed into a living, “breathing" machine in the form of Massey Ferguson’s 8S tractor offering outputs of up to 265hp.

The 8S range was officially launched on to the global market via a live streaming event on July 24, 2020, and is expected to arrive in Australia and New Zealand in early 2021.

The 8S tractor range was based on the MF NEXT prototype model Massey Ferguson debuted at the Agritechnica trade show late last year which pays tribute to the successful moon landing mission over 50 years ago.

“Last November, we were celebrating the 50th anniversary of the moon landing, which made the impossible become possible.

“Now it is time to deliver that vision landing on earth. We are not launching just a tractor, but also marking a new era for our brand.”

While the 8S might not be as futuristic as the NEXT concept which has rather bold features such as full autonomy and augmented reality windscreen displays, it still comes with a plethora of connectivity functions that are more practical in the real world.

Massey Ferguson said it spent seven years designing and testing the 8S series around the globe to ensure it ticks all the boxes for farmers everywhere.

“This completely new design delivers the next level of straightforward and dependable tractors that operators asked for,” Lhotte said.

“They told us they need a tractor that is comfortable, with unrivalled visibility, efficient, easy to use and smart. Massey Ferguson has responded straight to the point with the MF 8S and the associated services.”

There are four models in the MF 8S Series ranging from 205hp to 265hp, all with an extra 20hp from Engine Power Management (EPM).

The naming convention has also been simplified. For example, in the MF 8S.265 model, the ‘8’ stands for the Series, the ‘S’ stands for the specification level and the last three digits represents the maximum power output.

Massey Ferguson has blended the new and the old when designing the 8S machines.

While bearing a modern look with sleek curves and lines, the 8S’s ‘neo retro’ design pays tribute to the brand’s heritage with its re-interpreted MF grey sabre stripe on the side and horse head collar motif on the bonnet, which dates back to the MF 100 series.

A brand new cab offers an interior volume of 3.4-cubic-metres, which Massey Ferguson claims is one of the most spacious in its class. With 6.6-square metres of glass area, it offers great all-round visibility for all types of farm work.

Massey Ferguson’s new Protect-U design has a 24cm gap separating the cab from the engine that completely insulates the cab from noise, heat, and vibrations. According to Massey Ferguson, noise levels in the cab are at a low 68dB which makes the cab one of the quietest on the market.

A new digital MF vDisplay terminal fitted to the right pillar replaces the dashboard, leaving just the steering wheel and Power Control lever in front of the driver for better forward visibility.

The MF vDisplay is easy to read and shows the operator all the tractor information at a glance. It can also be personalised by scrolling through the settings using a rotary knob by the steering wheel.

The new Control Centre armrest is fitted with the latest MultiPad lever that provides complete fingertip control. This ISOBUS compatible lever operates all the tractor functions and includes an integral micro-joystick to control two spool valves.

The updated Datatronic 5, which comes with a new, glossy front glass and user interface, is mounted on an adjustable arm. Massey Ferguson said the 9-inch touch-screen terminal is as easy and intuitive to use as any mobile phone or tablet. It is a single screen system for controlling the tractor functions and manage all MF Technologies such as MF Guide, MF Section and Rate Control as well as MF Task Doc data capture and transfer.

Depending on the specifications, operators can enjoy luxurious leather seats and leatherette finishes on the steering wheel and trim for a high-end feel. The new seat is auto-air suspended, heated, ventilated and equipped with lateral damping. There is also an automatic air-conditioning system on all models plus a mechanical active cab suspension on Exclusive specification models for enhanced comfort.

Two specification package choices are available to farmers - Exclusive and Efficient - to cater to every farmers' needs and budgets.

An Engine Power Management (EPM) function provides all models with an extra 20hp for transport, PTO, and hydraulic applications. Maximum power is generated at 1000 rpm and is constant up to 1500 rpm – providing high performance at low engine speeds that cuts fuel consumption by 10 per cent and noise by up to 6dB, Massey Ferguson said.

A Selected Catalytic Reduction (SCR) system and a Soot Catalyst (SC) are integrated into one system that does not require a Diesel Particulate Filter (DPF) or complex Variable Geometry Turbocharger.

In addition to reducing heat, noise and vibrations transmitted to the cab, the Protect-U design improves cooling and performance of the engine. Air drawn in from the middle of the tractor, behind the engine, is cleaner than that from the standard position. The clean air helps reduce the load on the main air filter while optimising engine performance.

Available with the 8S series is the Dyna E-Power dual-clutch gearbox that Massey Ferguson said works like a continuously variable transmission (CVT) with the ability to transmit power as efficiently as a mechanical transmission.

It offers four ranges with seven gears, with semi-overlaps ideally designed for maximising in field and on-road performance.

Massey Ferguson said the Dyna E-Power transmission reduces power losses by up to 26 per cent at high speeds compared to the Dyna-6, delivering fuel savings of up to 10 per cent.

It can be operated fully automatically or manually using buttons on the MultiPad or Power Control lever. Massey Ferguson said the Dyna E-Power allows top speed to be reached at lower rpms, resulting in further reductions in fuel consumption. 50km/h is reached at 1500rpm, while 40km/h is achieved at 1200rpm.

Alternatively, users can opt for the new Dyna-7 semi powershift gearbox, which is one step up from the renowned Dyna-6. The Dyna-7 has a total of 28 forward and reverse speeds in four ranges and seven gears. It can also be operated both manually or in full automatic mode.

Massey Ferguson added the MF Dyna-VT CVT transmission will be available on the MF 8S Series in the near future.

Massey Ferguson MF 8S series tractors are built on a 3.05m wheelbase for better stability and traction when working with heavy implements.

Power is transferred to the ground through a new, strong rear axle, with a choice of flanged, short, or long bar axles to suit different operations.

The 8S models have a three-point linkage capacity of 10,000kg and a powerful 150l/min closed-centre, load-sensing hydraulic system as standard. A 205l/min flow is available as an option, which can also be supplied as an ECO version that generates the flow at 1650rpm. Up to five electronic rear spool valves can be specified.

Connectivity is the name of the game with the 8S tractors. Standard on the MF 8S series is the MF Connect Telemetry with a three-year subscription license which allows operators to transfer information to the MF Connect Cloud using mobile data.

As well as logging the machine’s position and data, it can also send error messages and upcoming service requirement alerts to users and dealers.

The telemetry system is fully integrated into the MyMF customer portal where users can view and manage the data in real time using any internet-enabled device from anywhere in the world. Massey Ferguson said the MyMF will be available soon in the UK, Ireland, France and Germany with other countries to follow suit.

All MF 8S Series tractors can also be equipped with a full range of Sustainable Farming Technologies that are controlled via the intuitive Datatronic 5 touch-screen terminal in the cab.

A new antenna rail, positioned at the front of the cab, enables easy mounting of a GPS receiver of the operator’s choice with RTK precision. For security, the antenna is locked in place with a key as standard.

An optional Fieldstar 5 terminal can be used to manage all the MF Technologies such as MF Guide and MF Section and Rate Control. The latter can now handle up to 36 sections and five products; and can also record field boundaries and provide automatic field detection, Massey Ferguson said.

MF Task Doc Pro will also create application plans and fully synchronises with farm management software. With NEXT Machine Management, data can be securely transferred wirelessly via the Agrirouter Cloud.

The 8S range with both Dyna E-Power and Dyna-7 transmission options will arrive in Australia early next year. 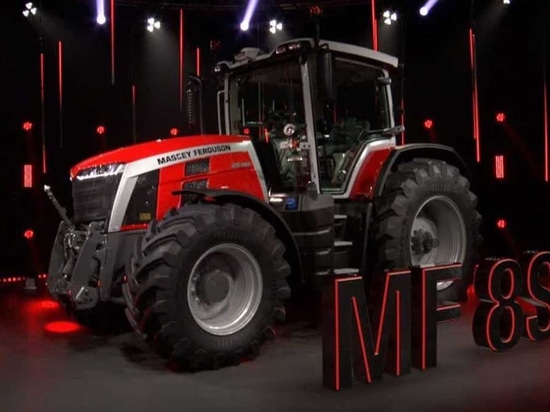 The Maasey Ferguson 8S made its global debut via a live streaming event broadcasted from Beauvais, France. 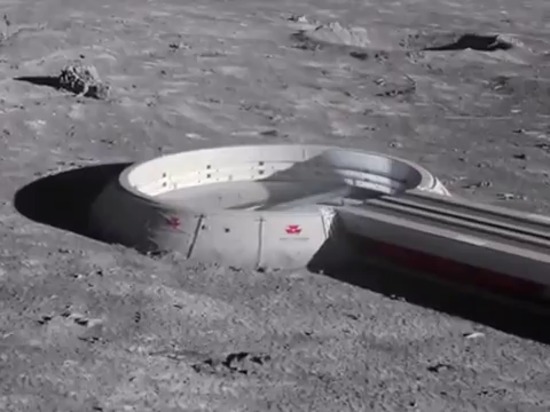 The MF NEXT Concept tractor is ready to take off! 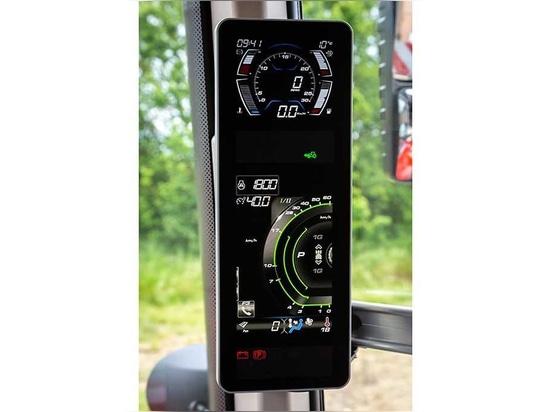 The MF vDisplay fitted to the right pillar replaces the dashboard and shows the operator all the tractor information at a glance. 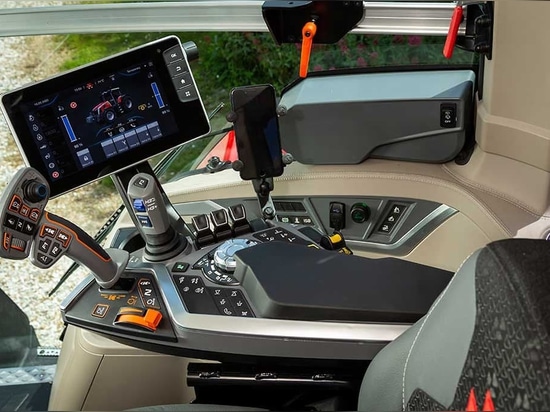