A Northern Ireland farmer has spoken in praise of Michelin’s X Tweel SSL airless tyre and wheel combination – after becoming the first person in the country to put them into operation.

William Smyth, who runs a dairy and beef farm in County Antrim, has been running the fitments for more than a year after they were specified as original equipment on a New Holland L218 skid-steer loader.

Smyth would usually replace the pneumatic tyres on a skid-steer every two years, but expects to get far more service from the Michelin X Tweel SSL.

“The current wear rates suggest they are going to last a lot longer; I’ve been very impressed with the durability,” says Smyth. “I think they’ll keep going for four or five years, so more than twice the life I’d get from standard tyres.”

The New Holland L218 is used for moving animal feed and hay around the farm, as well as general cleaning and clearing duties. Working on both hard ground in the yard, as well as softer surfaces in the field, the Michelin X Tweel SSL All Terrain features a deep, open tread for off-road applications and use on varying surfaces. It can also be specified in a Hard Surface Traction version.

Smyth adds: “The grip we get is very good, and I’ll definitely never get a flat! We will look to get these tyres on all our skid-steers in the future.”

Michelin has offered its range of Tweel products for grass mowing, agricultural and industrial applications in North America for several years, but its fitment for skid-steer loaders is the first Tweel product to arrive this side of the Atlantic.

The product performs like a pneumatic tyre, but without the risk and downtime associated with punctures and impact damage.

For more information about the range of Michelin farm tyres available visit http://agricultural.michelin.co.uk 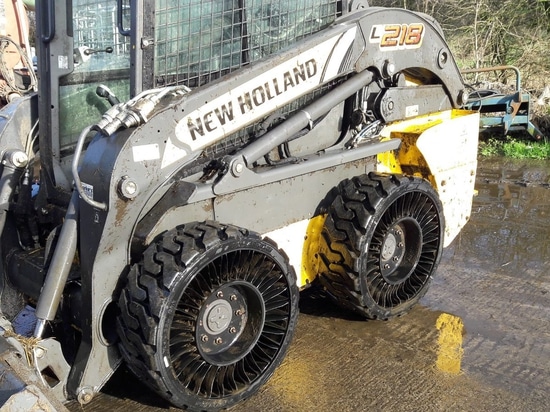