John Deere has announced the transition to Stage V engine standards on its smaller compact tractors over 25hp. A number of other updates has been made across 13 models of which range from 25hp-66hp.

As many larger tractors have made the move towards Stage V engine emission standards, smaller compact tractors now have to make the transition too. John Deere is the latest to do so on its smaller 25hp to 66hp machines.

Starting with the engine, the transition to Stage V emissions has been made to models over 25hp. This John Deere say is to "limit" ultrafine particulates less than 0.1 microns in size, while tractors below 25hp are believed to remain unchanged.

Like their larger counterpart, R series tractors, 2R and 3R models are now fitted with an after treatment system consisting of a diesel particulate filter (DPF) and diesel oxidation catalyst (DOC).

The 4052M and 4052R machines receive a 2.1-litre, four-cylinder engine with a DPF filter, the same power plants as fitted with the 4066M and 4066R model which remaining unchanged.

A number of the smaller 2R and 3R series machines have received new model numbers. 3R and 4R tractors are to be equipped with a new eThrottle function integrated in the eHydro transmission.

John Deere say this feature boasts reduced fuel consumption along with a quieter and more comfortable environment for the operator. Engine speed can be linked to the foot pedal by the press of a button so that both engine rpm and forward speed can be increased together as the pedal is pressed.

Hitch Assist system for the quicker and easier coupling of implements

4R series machines now have the added flexibility of the option of being equipped with a StarFire satellite receiver and an Autotrac steering system. Selected models are to be fitted with the Hitch Assist system for the quicker and easier coupling of implements. This allows operators to move the tractor forward and back at a maximum speed of 12mm/second as well as the options of raising and lowering the hitch, all which is carried out from buttons located on the tractors rear fenders.

While cabbed versions are available to be ordered now while models not equipped with a cab are said to be available from October. 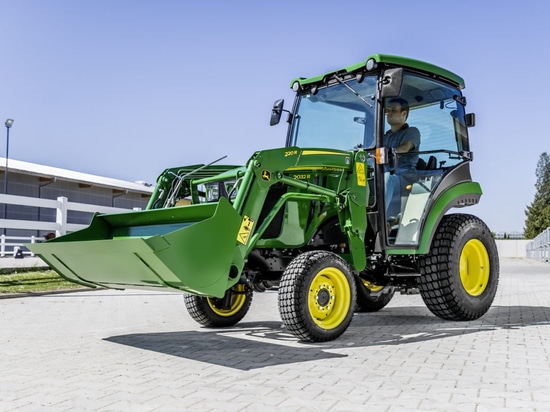