Plant protection is an important part of agriculture to secure high yields and optimal qualities.

Due to the increasing world population, both factors play an enormous role in securing food supply. However, the chemical plant protection sector is also facing a big challenge in future. On the one hand there is the problem of resistance and on the other side there is an increasing amount of legal regulation.

The future of plant protection consists of a combination of many different measures. These include the method of cultivation, sowing, choice of variety, crop rotation, catch crops, undersown crops, etc. After harvest, for example, high emphasis is placed on shallow soil tillage in order to maximise the emergence rate for volunteer grain and weeds.

This will also introduce an additional shallow soil tillage step for mechanical weeding between stubble cultivation and primary soil tillage. Primary soil tillage will become more intense and it is possible that ploughs will increasingly be used. When sowing, optimum sowing conditions and precise seed placement play an important role in promoting seedling development. Under certain conditions, the use of narrower row spacings for a faster canopy closure or targeted under-sowing can play an important role in preventing the growth of weeds.

Another approach is to increase row spacing to allow for mechanical weeding between the rows. Hoeing of grain is a definite trend in organic farming. Plant breeding will play an important role for plant cultivation in future. Cultivation requires very healthy varieties that have quick seedling development. Consistent yields and the assurance of quality rate higher than achieving absolute maximum yields. The issue of “integrated cultivation”, which has been discussed for many years, is increasingly getting attention.

The combination of hoe and band spraying facilitates a clean crop while saving 40 to 60 % of plant protection agents applied. Band spraying can be performed in combination with the hoe in one pass or as second step in a two-step process using the UX trailed sprayer and the AmaSelect Row nozzle control. At this point, the advantages of Schmotzer and AMAZONE are perfectly combined.

Traditional chemical plant protection will also be of greater importance in future. The demand for precision down to single-plant treatment will increase. AMAZONE, for example, offers a system including AmaSwitch or AmaSelect single nozzle control in connection with the GPS-Switch automatic nozzle switch-off, which can save on average between 8 to 10 % of plant protection agent by focused switching off at the headland and in wedge-shaped fields. Further increases in the level of sophistication for AmaSelect single nozzle control, which were introduced at Agritechnica, include the functions AmaSelect Row, AmaSelect CurveControl and AmaSelect Spot. These can help to improve accuracy and save on plant protection agents.

Two new AMAZONE solutions, the UX AmaSpot and the SmartSprayer Project, allow for targeted treatment down to individual plant level. When combined with the AmaSense Weather system, even the predictive models can be perfected and the treatment time optimised.

In the future, some of the mechanical and chemical plant protection activities may also be taken over by field robots, as the Bonirob project demonstrates so well.

The adoption of Schmotzer hoeing technology provided the AMAZONE Group will add an additional pillar for plant protection in future. The portfolio includes hoeing for rear, front or mid-axle mounting in up to 9 m working widths and row widths from 16cm to 200 cm. Thanks to camera technology, driving speeds of up to 15 km/h are now possible without problems. Even row spacing as dense as 12.5 cm can be detected by the camera. The new parallel shift frame facilitates accurate hoe work even at large working widths on steep hilly terrain with up to 40 % incline.

Low wear, e.g. by using HD versions of the soil-engaging metal, is becoming ever more important for hoe systems, due to increasing driving speeds and increasing performance requirements. In order to reduce downtimes or simplify the blade change for different application conditions, units such as the blade quick exchange system are increasingly offered as standard. Maintenance-free bearings on the hoes also reduces machine downtime.

In addition to control between the rows, mechanical weed control within the rows is also important. It must in this context be possible to adjust the aggressiveness of the tool, e.g. a finger hoe, to the growth stage of the row crops, for example, by changing the angle of attack.

The hydraulic single-row parallelogram unit ensures minimum damage to the crop, also in wedge-shaped fields and steeply angled headlands. In addition to mechanical treatment of the weeds within the row, there is also the option of band spraying or fertiliser delivery during the hoeing process. When combined with the GreenDrill universal catch crop seeder box, catch crops, fine seeds and micro-granular material can be dispensed via baffle plates behind the hoeing equipment.

In addition to mechanical weed control, the associated savings of plant protection agents and the option of successfully fighting even resistant weeds, hoeing offers even more benefits. Hoeing can break the encrustations of the soil, which promotes ventilation of the soil and therefore root growth. Opening of the soil also significantly improves the ability to absorb water. And on the other hand, it also breaks the capillary water draw and thus reduces the evaporation of water from the soil. The worked soil warms up faster and thus promotes early development of a spring crop. 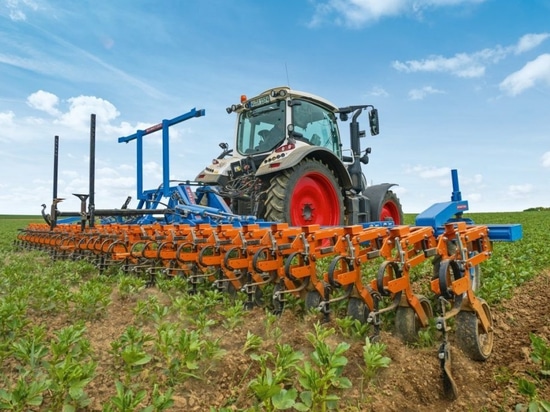