The Dung Beetle Ecosystem Engineers project is being carried out by the CSIRO and Charles Sturt University with funding from Meat and Livestock Australia.

Researchers are hoping that by introducing suitable species, a better natural control strategy can be achieved against flies and livestock parasites.

If it wasn't for these composting organisms, in a couple of years we would be knee-deep in dung and surrounded by black clouds of flies

"There are over 9000 species of flies in Australia and 180 species of bush flies," he said.

"Many are like Goldilocks, they don't like conditions to be super-hot and dry and they simply can't survive cold winters.

"Flies that are bothering us in southern Australia are often blow-ins that have come from northern parts of the country."

"Dung, in particular from ruminants, is an ideal breeding ground for many fly species, they think its Christmas when they're surrounded by piles of nutritious dung," he said.

When it comes to dung beetles, one size doesn't fit all.

"Fortunately, dung beetles compete with flies for dung and can be so efficient that a dung pat is buried in as little as a day or two.

"This means the maggots, or fly larvae, don't have time to develop, their life cycle is halted in its tracks."

Professor Gurr said another benefit of dung beetles is that by burying the dung a waste product is converted into plant fertiliser.

"If it wasn't for these composting organisms, in a couple of years we would be knee-deep in dung and surrounded by black clouds of flies," he said.

Professor Gurr said the drought had potentially had a negative effect on populations of dung beetle.

"Dung beetles reproduce deep in the soil profile, depending on the species they can be more than 50 centimetres down," he said.

"This keeps them safe from predators like birds but if the ground stays rock hard for a prolonged period they have a really hard time digging their way out and completing their development.

"Another factor is that during drought, there is of course less dung around so this can also reduce dung beetle numbers.

"This can cause increased fly activity once dung does become available again because flies can respond immediately and complete their life cycle in just weeks.

"Most dung beetles, in contrast, take at least a year to complete a generation."

Professor Gurr said the introduction of new species of dung beetle could increase the overall effectiveness of the beetle population.

"When it comes to dung beetles, one size doesn't fit all. There is no single super-duper dung beetle that will control dung in all soil types, in all locations, in all parts of the year. They tend to specialise," he said.

"Back in the 1980s, CSIRO bought in dozens of species but unfortunately of the ones which successfully established, there aren't many species that remain active during the spring months.

"This is another reason why we could be seeing large numbers of flies in parts of Australia over spring and summer, as the winter active dung beetles have finished and the summer active species haven't properly matured yet.

"We hope they will complement the species that are already established in Australia to give greater continuity and coverage of dung beetle activity throughout the year."

"The dung of affected animals is packed full of worm eggs and the larvae that hatch from these lay waiting on neighbouring pasture plants, soon to be consumed by livestock which are then infected," he said.

Professor Gurr said last year the project staff distributed the new beetles that had been bred up in the projects dung beetle rearing facilities.

"Throughout the project, tens of thousands of adults will eventually be distributed into new paddocks across southern Australia, in association with Landcare, farming systems or livestock groups aligned with the project," he said.

"One of the cool things about this project is that once we release the dung beetles, we can go back to release sites and where there has been strong establishment, we can harvest a fraction of these beetles and release them on to more sites.

"It's a bit like a pyramid scheme, where the scope for making further and further releases grows exponentially each time.

"This should help to provide a strong legacy for the project and its associated activities." 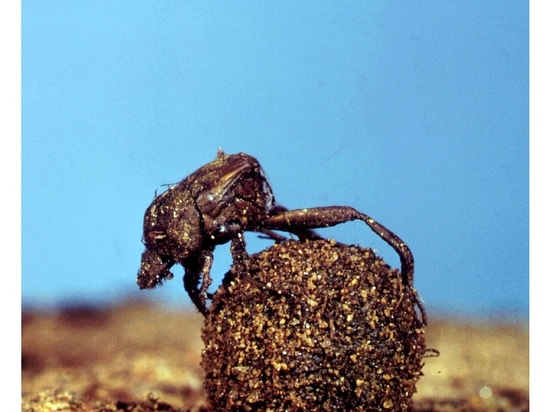