UV light could be used in fight against sea lice

Scientists have concluded that exposing sea lice egg strings to ultraviolet light can be useful for preventing eggs re-entering the environment after delousing of salmon.

But they are more cautious about using UV on lice-infected salmon because it can harm the fish.

The researchers from Norway’s Institute of Marine Research and the University of Melbourne, Australia, carried out three experiments to test whether 254 nm ultraviolet-C light (UVC) could reduce production of infective copepodids in infested sea cages.

In the first experiment, they removed mature egg strings from female lice and exposed the egg strings to precise doses of UVC light. A total dose of 0.008 J cm¯² reduced copepodid production by 5%, while a 95% reduction occurred at 0.09 J cm¯².

In the second experiment, they exposed salmon with attached adult lice to UVC light while they swam freely in tanks over a six-day period, achieving a dose of ~0.1 J cm¯². The treatment resulted in a 99% reduction in copepodid production relative to control groups. However, UVC negatively impacted fish welfare, causing higher rates of cataracts and skin irritation.

In the third experiment, the researchers tested the sensitivity of fish (without lice) to increasing doses of UVC light, and found that minor skin injuries occurred at beyond 60% effective doses, while cataracts began to develop at very low doses.

In conclusion, they wrote: “We have demonstrated that sufficient doses of UVC irradiation can dramatically reduce production of infective stages from salmon lice egg strings, and deployment for treatment of delousing system outflow or other waste water from salmon aquaculture could provide immediate benefits.”

In the context of treating salmon, the researchers concluded: “The application of UVC light to lice-infested salmon via underwater lamps can prevent fertilised salmon lice egg strings from developing into infective stages.

“The feasibility of this application in full-scale industrial settings will depend on developing an exposure regime that offers cost-effective reductions in lice production with minimal side effects for host fish.” 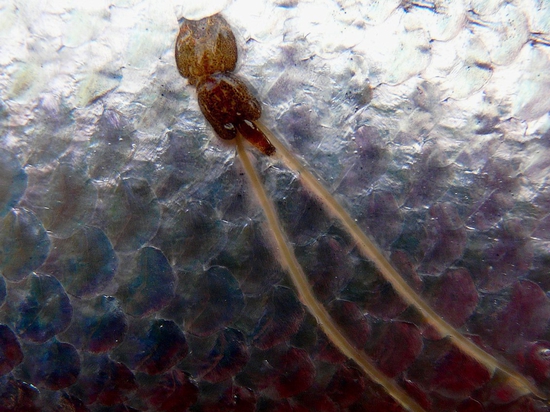 A louse with egg strings attached to a salmon. UVC light can destroy the viability of eggs that re-enter the environment.