For some reason, cows enjoy rotating milkers. No one really knows why, but cows are just more relaxed going round and round. Taking the concept of the rotating milker a step further, a relatively new product has come to Canada with Abbotsford’s Vyefield Farms installing the sixth GEA DairyProQ milker in the world (first in North America) in April, 2016.

The Kielstra family has owned and operated Vyefield Farms since 1963 so they knew there had to be a better, faster and less labour-intensive way to milk the current herd’s 370 lactating cows. Brian Kielstra, dairy manager of the farm, notes the family’s desire for a solution that was quicker and easier led them to explore the GEA milker via a trip to Germany. Everyone came back impressed and the decision was pretty much made as a result.

“Before, it took about six hours to milk 250 cows. Now we are milking about 110 cows per hour, two times per day,” says Kielstra. “We milked in a herringbone style parlour before with automatic take-offs, but someone needed to be around to attach the milking machines. Once they were done, the machine would come off and the milker would need to apply a post-dip, which the robots do all by themselves now.”

The robots in the 32-stall robotic milker actually perform four functions exactly the same way, every single time, according to Richard Siebring with Pacific Dairy Centre, which sells the GEA products in the Fraser Valley region.

“What the dairyman is going to get is consistency for the cow. In our world they say a boring life for the cow is a good life for you,” says Siebring. “Even though we follow the proper protocol that is in place, your touch is different from my touch which is different from the other person’s touch. When you have a machine like the robotic rotary, the same thing happens. We clean the cow’s teat in the liner, we pre-strip in the liner, we milk in the liner and we dip in the liner and do that on a [per-teat] basis.”

This consistency makes for a boring life for the cows and an increase in health and production capabilities. Siebring says that while the capital costs for the rotating robotic milker can deter some farms, others see how the costs are offset by the reduction in labour and increased cow health.

Fewer dairy workers are required because the robots attach themselves to the cows—one in each of the 32 stalls. This frees up time to watch cows for concerns, some of which the technology will point out on the management screens. If it takes too long for the robot to attach to the cow, dairy workers are notified by a colour change on the stall indicator on the monitor. Workers can then attach the robot manually if necessary. The system allows for a number of options to be selected.

“The rotary milking parlour was appealing because of its efficiency and the cows’ desire to go for a ride,” notes Kielstra. “When you add the robotic portion, it reduces our labour needs and gives the cows the same experience each and every time.”

This simplicity and routine also appeals to Kees VanBodegom who is the herdsman responsible for cow health at Vyefield. The system even allows for adjustment to the timing of the rotation so that faster milking cows are on the platform for a shorter period of time than slower milkers.While Kielstra notes the new system creates more simplicity at the farm, installing the first GEA DairyProQ milker in North America wasn’t quite so easy. Ground breaking for the new building to house the system was in October 2015. Building and installation took about six months.

“The cows did good during construction,” says Kielstra. “Obviously there was a lot happening around them, but their living areas were not affected with the construction of the new milking facility. Once we had the green light from GEA to start, we started milking. It took a little bit for the cows to adjust to the moving platform, but after a few days they had the hang of it already.”

Training to the rotary robotic milker is easy, though some use grain as an enticement, according to Siebring.

“That is an option to have them come up [on the rotating platform], but there’s not much training. Maybe the first week, a little bit to get them up on the rotary,” he says. “It’s the same as changing to any other milking system; if anything, it’s easier—they just walk on. There’s no turn.”

The cows also get to know that once they don’t feel the butt rail against their legs, they can back up a little and step onto a bridge. As the rotation continues, they back off the platform and exit. For cows that need more incentive to move out of their milking stall, there are air-blast or mild shock options.

When considering milker options, the Kielstras thought about robotic boxes that cows walk into versus the robotic rotating milker.

“There are robotic options to put robots directly into the barns, but a big problem with this is if something happens to the robot, you need to go right away to fix it,” says Kielstra. “With this [rotating] system, we have the flexibility to block off a unit [stall] and fix it when we have time. Otherwise, you are on call 24/7.”

Siebring notes that many dairy workers like the rotating robotic system because they get to see their cows multiple times a day without having to manually attach milkers. It’s this labour savings and consistency that sells a number of dairies on it.

“We see good milk flow; we see excellent milk let down; it’s got a lot of benefits to it,” he notes. “The connectivity can be a truer measurement because it’s quarterly [per teat].”

While the robotic rotating milker may be an excellent option for many dairies, it still doesn’t answer the question of why cows like to go around.

“My boss always says when he dies and goes to heaven, the first thing he’s going to ask God is ‘why do cows like rotaries?’,” says Siebring. “It doesn’t matter if it’s clockwise rotation or counterclockwise rotation, they just love getting on a rotary.” 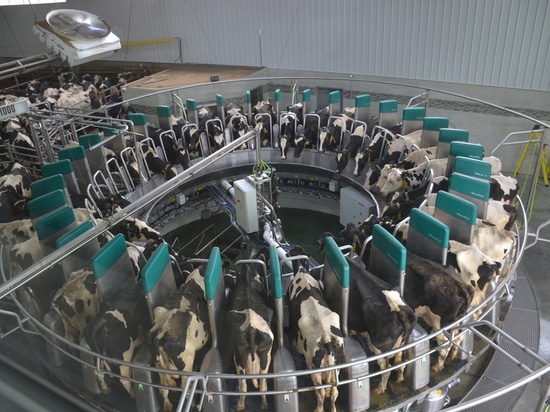 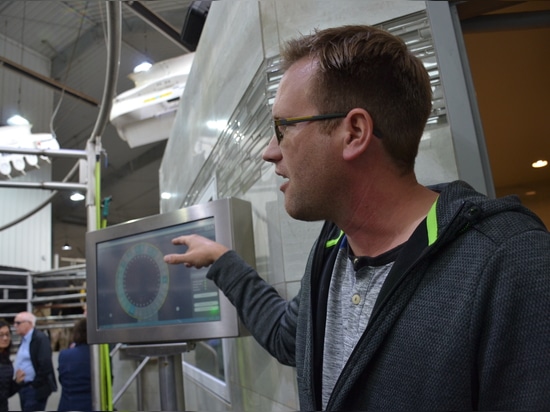 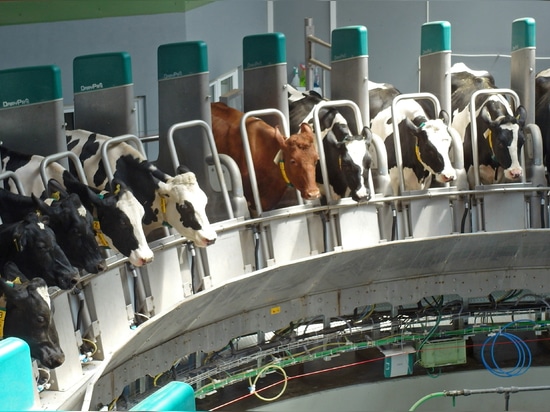