If current trends continue, the region's status as a major strawberry producer will depend in large part on what happens in Mexico.

First, the Latin American nation is selling more of the sweet crop for less, cutting into profits for a Plant City industry now worth nearly a billion dollars a year. And second, local operations depend on farm workers from Mexico for the back-breaking job of picking — and fewer of them are making the trip.

So Wishnatzki, working with engineer Bob Pitzer, created the company Harvest CROO Robotics in 2013 to develop an automated strawberry picker that's expected to make its debut next winter. It will be five years or more, he said, before automated harvesters make a significant impact on the industry.

PACKING IT IN: Challenges driving Zellwood corn farmer out of businesses

SURPRISING STRAWBERRIES: 10 things you might not know about our local crop

"If we don't automate American agriculture and these specialty crops like strawberries — they're either going to be very expensive or non-existent," Wishnatzki said. "Within the next 10 years, it could happen."

That view is echoed by Kenneth Parker, executive director of the Florida Strawberry Growers Association.

"Gary is such a forward thinker and visionary and has invested a lot of money into robotics," Parker said. "He's really on the right track."

Robots can work longer hours and at night when the temperature is cooler, which is "better for the integrity of fruit," Parker said.

"There can be a lot of real advantages to robotic harvesting and there's a great need for it. The labor pool is shrinking. I don't think any of us can hide from that."

Meantime, Wishnatzki is seeking outside support for innovation and relief from labor costs, in part through his testimony in Washington last month with a panel of specialty-crop farmers before the U.S. House Agriculture Committee.

One of Wishnatzki's goals is getting access to public research funds without having to partner with a university — an arrangement that can require surrendering valuable intellectual property rights.

"This is problematic to our outside financial investors," Wishnatzki said. "Collaborative private-sector technology startups could advance at a faster pace, if given direct access to agricultural research funds."

Another goal is to change the way farmers are required to provide compensation under the federal H-2A temporary agricultural worker program. A box of strawberries harvested by H-2A temporary workers costs him $4 now, Wishnatzki said — $1 more than the cost when it's harvested by other workers.

Farmers must provide housing and transportation to workers visiting from Mexico and elsewhere, who account for a growing share of his workforce. These workers also are tied to one employer during the period they work here.

Wishnatzki said eliminating these requirements would help farmers and farm workers alike. What's more, he proposes that the United States ensure guest workers return to their home countries — and not overstay their work visas as undocumented immigrants — by withholding full payment from them until they do.

A Tampa-based attorney who works with immigrants, Mayra Calo, agrees that the H-2A program is in desperate need of reform and favors much of what Wishnatzki proposes — with the exception of withholding wages.

"The ... program, as it is, already has connotations of indentured servitude," Calo said. "Withholding pay only furthers that conception."

The best incentive to ensure that workers return to their home countries is to ensure them they'll be able to return to work here again, Calo said.

Untying temporary workers from a single employer, she said, making them portable, is a good idea, "so you can go from the strawberry farm in Plant City to the apple farm in Washington State. Right now, if they do that they violate their status and they can't come back."

Research bears out the need for strawberry farmers to find new ways of doing business if they are to survive.

U.S.-grown strawberries can cost $6,000 more to harvest per acre than those harvested in Mexico, said Zhengfei Guan, an economist with the University of Florida. Wishnatzki estimates his labor cost per acre at $13,000.

That helps explain why imports of Mexican strawberries increased fourfold from 2004 to 2016, to 360 million pounds, according to the U.S. Department of Agriculture. This compares with the 240 million pounds of strawberries produced in Florida in 2016. Only California, with four times Florida's acreage planted in strawberries, produces more.

"Mexico's competitive advantage in labor cost is a fundamental driving force that led to the surging export," says a recent study co-authored by Guan.

To stay competitive, Florida growers must offer their strawberries at prices similar to those from Mexico. That leaves them with profit margins that are slim and growing slimmer.

"To the average consumer, they receive basically the same price on the market," Guan said. "We cannot sell at a higher price ... consumers will switch to Mexican strawberries."

Trends in the Mexican labor market also argue for changes in how strawberry farmers do business.

A 2015 study by the Pew Research center shows a sharp decline in the number of Mexican immigrants in the United States. Between 1995 and 2000, the net migration was 2 million people. By 2014, as Mexico developed economically, the number dropped to a negative 20,000.

"Our immigration policy is getting more strict," Guan said. "More immigrants and undocumented workers are leaving the country than coming in. On the Mexican side, there are better economic opportunities. More workers are going back to Mexico and fewer are coming to the U.S."

What's more, better paying jobs in construction and housing are pulling laborers out of the fields.

Over the longer term, the Mexican workforce is shrinking because of a decline in the country's birth rate, Guan said.

"That is a preview of what the next 20 years looks like," Wishnatzki said. "It is easy to extrapolate that the trend of a shrinking and aging labor force is going to continue, based on these demographics."

Still, he said, "I believe we're going to muddle through until automation. But it'd be nice to have a little certainty about the next five years."

The ripples from a healthy strawberry industry spread far beyond the fields, said Parker with the growers' association.

"When you're talking Florida strawberries you really are talking Plant City," he said. "If we don't get relief for our labor shortage, it can have deep and lasting economic impacts on our economy." 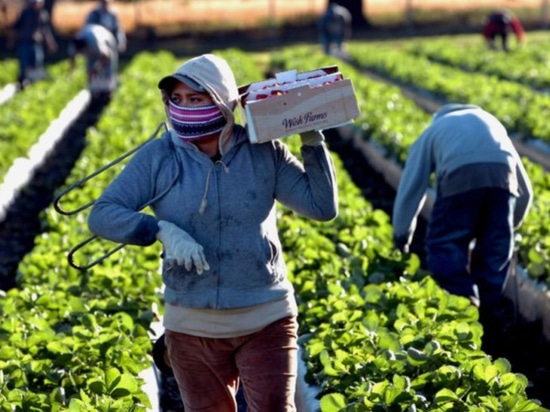