The resounding message from this year's World Food Day celebrations in Rome and in many countries is that climate change, hunger and poverty must be addressed together in order to achieve the sustainable development goals set by the international community.

Droughts and floods are more frequent and intense as are climate-related outbreaks of diseases and pests, he added, citing the terrible impact of El Nino in parts of Africa, Asia and Central American and more recently, Hurricane Matthew in Haiti.

"As usual the poorest and the hungry suffer the most and the vast majority of them are small family farmers that live in rural areas of developing countries," the FAO Director-General said, noting how adaptation and mitigation to climate change is fundamental, and that this requires "much better access to appropriate technologies, knowledge, markets, information and investments."

Recent international commitments for action, including the Paris Agreement on Climate Change and the 2030 Agenda for Sustainable Development, recognize the fundamental role of sustainable agriculture in addressing climate change, hunger and poverty.

The World Food Day 2016 slogan: Climate is changing. Food and agriculture must too underscores the fact that to feed a global population expected to reach more than 9 billion by 2050, humanity needs to produce more food, but in ways that use up less natural resources and that drastically reduce loss and waste.

In his address, Italian Prime Minister Matteo Renzi stressed that the fight against hunger is essentially a political issue. "Italy maintains that the fight for food security is, at this point in history, a question of politics with a capital ‘P'," he added.

Prime Minister Renzi said that the international community needs to urgently address the problems of inequality and injustice. Italy would strive to ensure that these themes are at the top of the international agenda, including at two important events in March next year: the G7 summit, which Italy will host and preside and a meeting of European Union leaders.

Renzi noted that Europe should reject a "culture of waste". Italy recently passed a new law aimed at curbing food waste, one that was based, "more on collaboration and less on punishment".

Another keynote speaker at today's ceremony, Princess Lalla Hasnaa of Morocco, whose country is hosting next month's COP22 climate talks, said these would be "action-oriented" and geared towards implementing the Paris Agreement.

"The Moroccan Presidency will seek to nurture and promote the spirit of mobilization which prevailed in Paris in terms of increasing climate funding, developing expertise and ensuring the transfer of technology. It will lay special emphasis on adaptation, primarily for the countries of the South and for Small Island States." Princess Hasnaa said.

In a special message read out at the ceremony, Pope Francis linked the impact of climate change on the planet's fields, fisheries and forests to migration of people from rural areas of developing countries. "The most recent data tell us that the numbers of ‘climate refugees' are growing, swelling the ranks of the excluded and forgotten, who are being marginalized from the great human family," the pontiff said.

"From the wisdom of rural communities we can learn a style of life that can help defend us from the logic of consumerism and production at any cost, a logic that, cloaked in good justification, such as increasing population, is in reality aimed solely at the increase in profit," he said.

Pope Francis expressed concern that a growing number of actors in agriculture "believe they are omnipotent, or are able to ignore the cycles of the seasons and to improperly modify the various animal and plant species, leading to the loss of variety that, if it exists in nature, has and must have its role".

What may "give excellent results in the laboratory may be advantageous to some, but it can have ruinous effects for others." He stressed that in dealing with such issues, the world should rely more on the wisdom that farmers, fishers and pastoralists "conserve in memory handed down through generations".

UN Special Envoy on El Niño and Climate, Macharia Kamau, for his part urged for the need "to build stronger solidarity, stronger actions, better partnerships and innovation, including insurance schemes that protect families and take risk out of humanitarian response" programmes.

"The 2030 agenda, at its core, is an agenda for fighting poverty, making sure there is no hunger, and food is there for everybody. And nothing threatens that more than climate change," he said.

"We must change the way we approach food and agriculture. Part of that change is ensuring rural smallholder producers are more resilient than ever before to the impacts of a changing climate," said Kanayo F. Nwanze, President of the International Fund for Agricultural Development (IFAD). "If we are ever to break the cycle of poverty and hunger, our attention must be focused on these smallholder producers who are the source of food for their families and communities, but are vulnerable to the effects of climate change."

Ertharin Cousin, Executive Director, World Food Programme (WFP) for her part said: Climate change is already stretching the international humanitarian system financially and operationally, so moving beyond disaster relief to managing risk is an urgent task for all of us. More than 80 percent of world's hungry live in areas prone to natural disasters and environmental degradation. Climate change is not waiting, neither can we."

On World Food Day, FAO is also hosting the second Mayors' Annual Summit where mayors and senior officials from more than 45 cities will discuss progress made in meeting the goals of the Milan Urban Food Policy Pact. The pact calls on cities to develop more sustainable and equitable food systems, end urban hunger, promote healthy diets, reduce waste and conserve biodiversity while adapting to climate change and mitigating its effects. 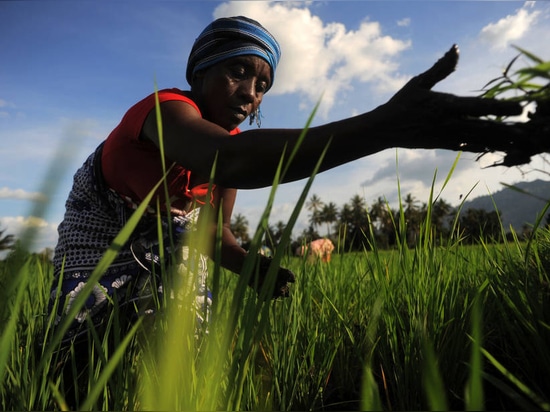 A farmer in Tanzania in a rice paddy which uses a climate-smart system to intensify production.