The agricultural traditions and food culture of the Mediterranean region have long been looked to as an example of a healthy approach to eating, underpinned by vibrant rural economies. But demographic and environmental pressures — coupled with a changing climate and social and economic challenges — are now raising questions about the future of the region's much-heralded food systems and the implications for sustainable development.

A major new book published today by FAO and the International Centre for Advanced Mediterranean Agronomic Studies (CIHEAM) warns of "triple waste" posed by the misuse of natural resources, food waste and losses, and a slow-leaching away of traditional know-how.

These risks need to be countered by shifting to more sustainable approaches to agricultural production and stronger policies based on multisectoral approaches, according to MediTerra 2016 - Zero Waste in the Mediterranean: Natural Resources, Food, and Knowledge.

"The world, including the Mediterranean region, is faced with a number of challenges. Various forms of waste related to food, natural resources and knowledge are embedded in these challenges and pose significant obstacles for the achievement of sustainability," write FAO Director-General José Graziano da Silva and CIHEAM Secretary General Cosimo Lacirignola in their introduction to this joint-publication.

MediTerra also looks at how human resources and potential in the region — especially among youth — are being wasted, hampering development. This includes unemployment, lack of access to education, "brain drain," and the disappearance of local knowledge and farming traditions.

The task at hand, the book says, is not merely preserving agricultural traditions, but rather re-invigorating them to make them engines of sustainable development and improved nutrition.

The new edition of the joint CIHEAM-FAO MediTerra publication — which casts a far-ranging eye over the agricultural and food systems of the broader Mediterranean region, from southern Europe to North Africa and the Near East — contains 17 chapters by groups of expert authors from both partners, organized into three main sections looking at:

The state of natural resources essential to agriculture globally and in the region, including marine fisheries, water, land, forests, plant and animal genetic diversity, and energy

Diverse aspects of food waste and losses in the world and in the region and how countries and communities are responding to the problem.

How the region's human resources and traditional knowledge are at risk of fading away, and how family farmers are responding.

MediTerra highlights a range of challenges which are bringing weight to bear on agriculture and food systems in the Mediterranean. For example:

Limited water supplies. The Mediterranean holds only three percent of global water resources but hosts over 50 percent of the world's water poor populations, around 180 million people.

In many places withdrawals of groundwater have surpassed sustainable thresholds. In agriculture — the region's biggest user — large volumes are lost due to inappropriate techniques or outdated infrastructure. Climate change will impose further stress on finite water sources.

Loss and degradation of land. The book warns of "the whittling away of arable land by advancing urbanization" as well erosion, salinization of soils and desertification, much of it stemming from unsustainable agricultural practices. Some estimates warn that if existing rates of land degradation continue, by 2020 another 8.3 million ha of agriculture land will be lost, versus 1960.

Food waste and losses. Accurate estimates of the magnitude of food losses and waste in the broader Mediterranean region are lacking, but country level data point to a major problem: in Spain, 7.6 million tonnes of food are wasted each year; in Italy, 8.8 million tonnes; in France, 9 million.

Studies of the North Africa and Near East area suggest a similar problem, with 250kg of food being wasted per household each year. The water footprint of these losses — 42 cubic kilometres each year — accounts for 17 percent of all global water losses sourced to food waste.

Fisheries and forests at risk. The sea has been a bedrock of livelihoods and food security in the Mediterranean for millennia. Today, 52 percent fish stocks surveyed are being exploited at unsustainable levels. In a similar vein, the surface area of the region's forests has dramatically declined, despite the important role that they play in local ecosystems.

A "brain drain" in agriculture. While much farming in the region is family-run, and remains competitive in the face of larger, consolidated agro-industries, some regions have seen communities and traditions fade away. In North Africa's Maghreb zone, for example, the average age of farmers is 50+ — at the same time, the region faces one of the world's highest youth unemployment rates.

Many of the challenges facing food systems, natural resources and knowledge are common to all Mediterranean countries, the book notes, highlighting the importance of a shared agenda of research and action, integrated policies and innovations — both technical and organizational — to address "triple waste" in a coordinated way.

Here CIHEAM and FAO can play a key role: they offer a unique and fertile arena for the exchanges of experiences, expertise and analysis aimed at proposing responses to the many challenges faced by the Mediterranean region.

Doing so, the book argues, "is strategic for the future of Mediterranean countries and their sustainable development." 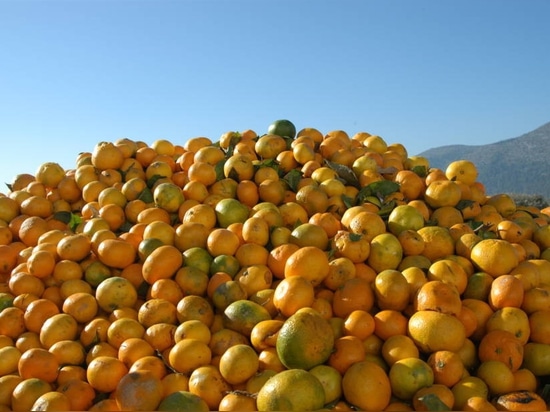 Croatia: A pile of pest-damaged oranges, destined for disposal.